I have been asked whether I monitor my blood glucose regularly, by the haematologists and my answer is that I have recently had a couple of HbA1c tests which  each show the average over the previous three months but nothing more than that. The same question was asked at my last oncology appointment and so I have been encouraged to get a blood glucose monitoring test kit so as to track my blood glucose levels better – not necessarily every day but perhaps weekly. I raised this with my GP and she agreed that I should do this although it would normally only be done for patients at risk of hypoglycaemia – which I am not.

The reason for wanting to monitor my blood glucose better is that chemo and steroids have messed up my blood sugar levels and I need to get them back under control. When I went to the doctors in February 2010 with a cough and came out with diabetes my HbA1c reading was 67mmol/mol. Since then it has been running at an acceptable 45-49 mmol/mol until this year when it has gone back up to the high 60’s.

Now I had better get a bit technical and explain that HbA1c is not the same as blood glucose but there is a relationship. As Diabetes UK explains HbA1c refers to glycated haemoglobin (A1c), which identifies average plasma (or blood) glucose concentration. The amount of glucose that combines with haemoglobin is directly proportional to the total amount of sugar that is in my system at that time. Because red blood cells in the human body survive for 8-12 weeks before renewal, measuring HbA1c can be used to reflect average blood glucose levels over that period. It gives a useful longer-term gauge of blood glucose control.

Measuring the blood glucose level with a finger prick give the concentration of glucose in my blood at a single point in time, i.e. the very moment of the test. So obviously if I took the reading immediately after a meal (or heaven forfend, a slice of Christmas cake) the reading would be much higher. How much higher depends on what I had eaten – fish and chips would have a bigger impact than a salad (unless it was a lettuce sandwich with sugar on, which is something I remember being given when I was little!). So this is a test to be taken first thing in the morning before breakfast so as to give me a fasting blood glucose level rather than one distorted by my last meal.

While the HbA1c value, which is measured in mmol/mol, should not be confused with a blood glucose level which is measured in mmol/l Diabetes UK have an HbA1c conversion tool to help with switching between the two measurement units. My pre-2010 and post chemo levels of 67-69 mmol/mol are equivalent to 10.6-10.9 mmol/l while my average over the intervening five years of 46.4 mmol/mol equates to 7.6 mmol/l. 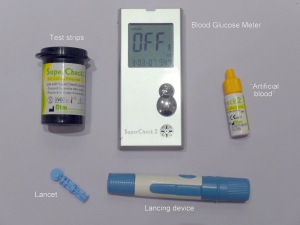 OK lecture over, back to getting blood out of a stone. On Thursday I went and saw a nurse to be instructed on using the Blood Glucose Monitoring System. There are five components in the pack – the Blood Glucose Meter, Test Strips, some artificial blood for calibrating the meter, Lancing device and Lancets. You place a lancet in the lancing device, twist off the protective cover, replace the adjustable depth cap, place against the side of a finger and press the button. Bdoing and there is a drop of blood on your finger. Except there wasn’t. Try again with the maximum depth dialled up. Nope. And again. Give up and take the kit into the pharmacy where a pharmacist dressed as an elf (yes really) takes me through the steps and I realise I haven’t pulled back the lancet ejector before pressing the trigger button. The elf draws blood. However I have by now had breakfast so have to leave the test for tomorrow. Elves 1, Tim 0.

Next day I eagerly get my Blood Glucose Monitoring System test kit out and proceed to fire lancets at my finger. Excitement – there is a pinprick of red on the side of my finger. I carefully insert a test strip into the meter, which turns it on and it tells me “Apply blood now” so I place the end of the test strip against the side of my finger and it sucks up the blood. A pause and the machine announces “No enough blood”. Darn it. I fill the sink with warm water and place my hand in it hoping that might help. It does, I get a goodly sized drop on the side of my finger and insert the test strip into the meter which switches on and then as it is sucking up the blood it says “Goodbye”. I reinsert the test strip to turn the meter on and am told that it has been used so I can’t get a reading. I am running out of fingers (I have to use side of my little finger, my ring finger or my middle finger and should use a different site each time.

Eventually I manage to get a big enough drop of blood, get the test strip in right and get the vampire to suck up the droplet and announce a figure of 8.8. This is an improvement but not yet down to the level I want. Still it is progress and after many attempts I did manage to draw blood. Try again next week. 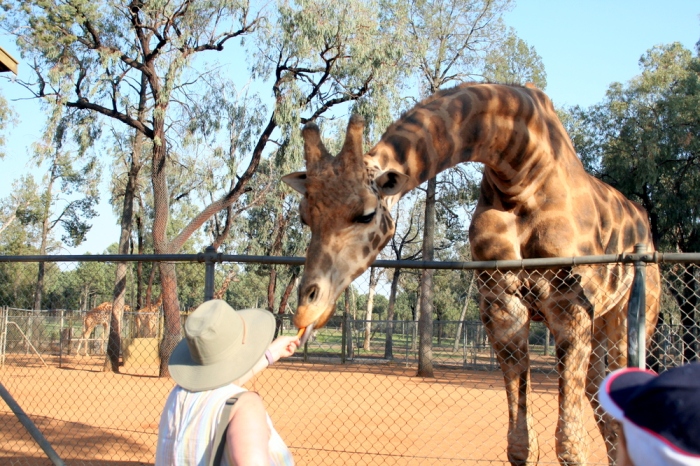 While I have your attention, I thought I would mention that one year ago, on December the 11th I had a blood test which revealed that my PSA had gone up to 17 and which started the chain of events that you have been reading about in this blog. Ten years ago on December the 11th we were staying in Narromine and had taken an early morning walk around Western Plains Zoo to celebrate our Pearl Wedding Anniversary. The zoo is to Taronga Zoo what Whipsnade is to London Zoo, but is one of the most open zoos I know and so my favourite. Later that day we met up with ‘mummaroo’. 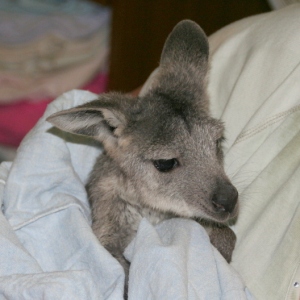