Blood Tests This month I had oncology and haematology appointments only a week apart so I thought it silly to go for two separate blood tests.  Off I went to the surgery with two blood test forms and found that the phlebotomist also had one form (from my GP) so she had the challenge of seeing how they differed and whether she could combine them and avoid taking too many gallons of my red stuff. After all, they all wanted a FBC, LFT and U&E (that’s a Full Blood Count, Liver Function Test and Urea and Electrolytes). In  addition Oncology, not surprisingly, wanted a PSA figure (I would be worried if they hadn’t asked for that)  and my GP wanted a couple of other things.

With a bit of reprinting of forms my blood donation was restricted to four phials (or is it vials?).  The needle that goes into my arm has a point at the other end which punctures the seal on the phial/vial/test tube and allows it to fill with blood. This is made easier by the vacuum in the tube so that, vampire-like, it sucks the blood out of my arm. Once full it is removed and another vial is put in its place until all four are filled. A process familiar to many, but I only recently discovered that different phials have different additives (such as an anticoagulant or a serum separating gel) in them which are indicated by the different coloured tops.

They are then whisked off to the laboratory for analysis. Some tests take longer than others (the FBC came back a day before the PSA result). I had to go over to CCHU to hear about the results.

CCHU (Cancer Care and Haematology Unit) is a single story building behind the main hospital and next to the Renal Unit. The entrance leads in to a reception area with a garden behind it and a reception desk to the right. There are two corridors running alongside the garden – the left hand one is used by the haematology team while the right hand one, which leads to Room 10 where I had my chemotherapy, is used by the oncology team. Every so often a consultant appears and calls out a name. One of the haematology consultants seems to be doing quite a lot of walking around on noisy heels (a bit intimidating) but when she calls me in she is relaxed and friendly. The previous week the oncology consultant had complained that he had to tell the printer (which is behind the reception desk) twice to get it to print once. But back to my reason for visiting CCHU – what were the results?

Results Well the key numbers were increasing which is good news and not so good news. Firstly the good news. My platelet count had surged (or is it crawled) to a high of 104, the best it has been since last May (when it was even higher). We know that platelets vary from day to day so no two platelet counts will be the same (except I did once have two consecutive figures of 44 which made the consultant check to make sure that they were two separate tests and not the same one accidentally repeated) so there will be a little variation between tests even if nothing has changed. Overall there seems to be a steady upward trend and even though lower than the ‘normal’ range, my platelet count is at a comfortable level. 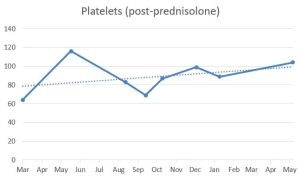 While I probably could have stopped seeing the haematology team I was given an appointment for a years time so as to keep me in the system (which could be useful if my platelets go awol again). In any case I will be able to track my platelet count because I will get regular figures from my quarterly blood tests for the STAMPEDE trial. I was told the warning signs to look out for (nose bleeds that don’t stop, unexplained bruising in places that you don’t expect to get bruises, pin prick rashes especially on legs and ankles) although I never had those when my platelet count plummeted to 10 twenty months ago.

What about the other key figure and the not so good news? It is not bad news as it stands – we need to see what the trend is and where it is going. Having peaked at 3.2 and then dropped back to 0.54 my PSA was now 1.1. Not a worrying level (yet). On the current trend that is quite a way off.

Like platelets, PSA levels can bounce around a bit. If the December figure of 3.2 was a lab error or some other spurious reading which could be discounted there was still a gentle upward trend so my oncology consultant asked for an additional PSA test before my next appointment to see if this gives any better indicator of a trend. He said that there is no particular reason for concern although it was difficult to explain the rise in PSA.

Appointments When I picked up my appointment letter after the second of these two appointments  I was surprised to see that it had grown from one sheet to two! The important information was in two lines with the rest being totally unnecessary “small print”. If I am being given an appointment letter for a follow up appointment I will be familiar with the information on the second page (and most of the first page) so it is a waste of ink and paper. The reception staff were also not impressed with the way the letter has grown.

When I make an appointment at my GP surgery I am sent a text confirming the appointment within ten minutes (which is easy to log in the calendar on my phone) as well as reminders a few days before the appointment. If anything is given hardcopy it is handwritten on a small piece of paper.

So if the hospital has my mobile number on its system (which it does) why can’t it just text me the details? If it does have to give me a printed sheet (and I appreciate that if an appointment has to be changed at a later date I will be sent a letter) why can’t it be restricted to just one page? Generally with the texted reminders and confirmations the health service is taking advantage of technology to make things easier for patients and hopefully reduce the number of missed appointments (so this is a little whinge about an extra sheet of paper and a pat on the back for making use of texts).

Anyway it’s back to oncology in September and back to haematology next May (first thing on our daughters 40th birthday as it happens). Meanwhile it’s time to enjoy the summer.